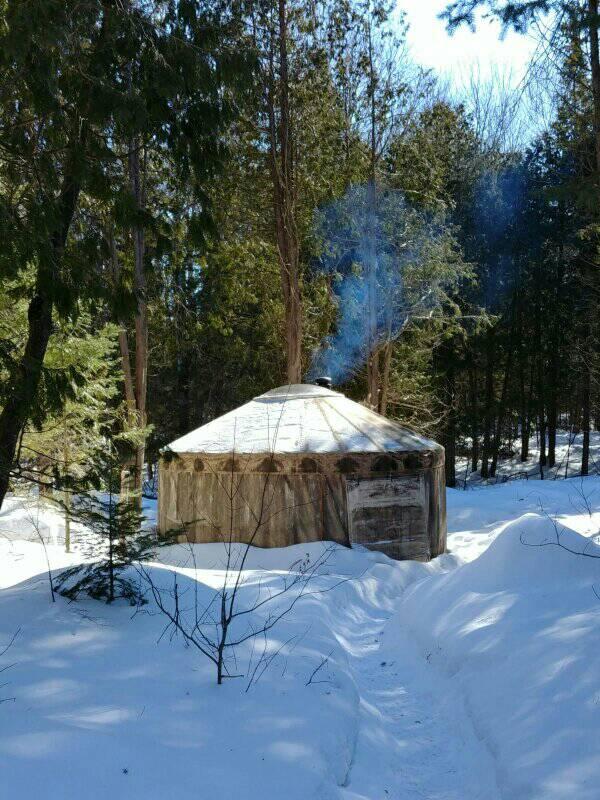 With winter seeming to stretch endlessly ahead of us, we decided to lean into it, to head straight for the belly of the beast.

We packed up the car and headed north with our snowshoes and a few bottles of wine, several days worth of food packed neatly into a cooler. The scene through the passenger’s side window became increasingly white and wooded the further we drove, until we reached the outskirts of Barry’s Bay where more than four feet of snow buried any and all hints of the spring that would surely find us, eventually.

We were searching for a yurt in a forest, which we had rented for a few days to escape the thrum, to soak in the silence. I needed somewhere to escape from real life and to recharge.

We pulled into a laneway, parking the car at the top and leaving everything inside it to go find our tiny home for the next few days. Past an impossibly large snowbank, we found and followed a path through the snow, at the end of which we could see a small hut with a smoking chimney. The perfect place to hide from reality. 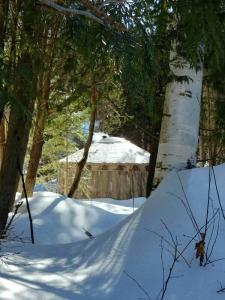 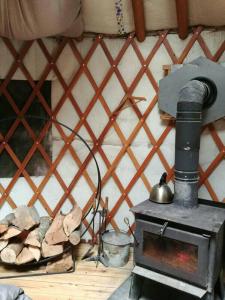 Inside was a bed, a couch, a small table with two chairs, and a wood stove. The smell of wood heat filled my head with inspirations for living different lives, living differently. It’s the smell of being far from the city. We lugged our things inside and got settled.

For the next few days, we explored the woods and the nearby towns, we hiked, snowshoed, drank tea by the fire and played cards in the yurt. I discovered the skeletons of hiding places all throughout the surrounding forest: small lean-to structures, old tree forts and primitive teepees scattered amongst the trees.

We cooked on the stove, we took our time, we enjoyed each others’ quiet company.

After dinner on the first night, as the light started to fade, we went out in search of the fire pit we were told existed just beyond the creek. The creek was buried, invisible, as was the pit, but with determination and a shovel, we were able to find it and carve out a snowy nook before night fell.

Sitting by the fire, my stress melted with the snowflakes landing on my cheeks, as my eyes followed sparks on their journey towards the stars. Yes, we had managed to hide.

The next day brought with it the clearest blue skies I had seen in weeks, and we hiked to an old logging chute, where an icey waterfall gurgled into a black and freezing river. We hiked a snowmobile path and laid in a snowbank for a half hour at the top of a forest hill, enjoying the sun with eyes closed and faces to the sky.

The cloudless day became a cloudless night, and we coaxed another bonfire to life as it became dark. We sipped wine from mugs, a blanket draped over a stump making our sofa.

We followed every curiosity, because we gave ourselves time to do so. One day, we strapped on snowshoes and found our way to a campground we had spotted along the road on the way in. We struggled our way through the untouched snow, telling us that no one had been there all winter long. About twenty minutes in was a lake, and several cabins, abandoned for the season. 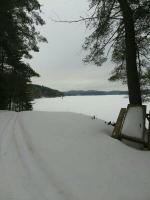 As I poked around, looking in windows and skirting snow-covered picnic tables, I could feel the ghosts of summer everywhere. Even still, I was content for the moment in the cold, amongst the snowy pines, feeling unobserved as we explored freely.

I found a note scrawled in chalk reading, “There are 2 gifts in the water.” The mystery of it made me smile. Whatever they were, they were surely trapped beneath snow and ice by now, waiting for the thaw to be found, if they hadn’t been already.

Several days up north filled with hiking, fires and exploring gave winter a new face. Hiding in the woods was the medicine I needed to push through the final weeks of March, daylight staying with us a little longer each day, the cold beginning its retreat at last. 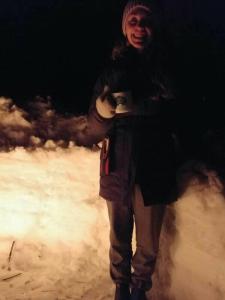 I was sad to go home, but a few days spent a few hours north had made my world a bit bigger.

Some other things I do…