I had to get over the fear of touching other peoples’ dreadlocks. They always seemed so delicate to me; as if if I were to wrap my fingers around one, it could suddenly break off, leaving me with an itchy snake of hair in my hand, not knowing what to do but to stuff it in my pocket or quickly throw it away somewhere.

I wouldn’t touch his for several days to come. It was a long play.

My ears were absolutely over-flowing with the sound of crickets emanating from the tall grass in the back field, punctuated every few moments by a crack from the fire, sending sparks up towards the sky where the milky way dripped an arc above us. The fireflies have been gone for months now, the summer having crept out the back door without announcement. We didn’t feel the grass growing damp with the nighttime dew, seeping through the open sleeping bag we occupied like a little raft next to the smoking chimenea housing our modest fire. The others had left, I guess to their beds, where doors and closed windows kept the night out, while we here continued to wrap ourselves in it. At some point he dragged another blanket over and dropped it on us.

He talked about rent, this fellow gypsy I had come to know by chance.

Why rent an apartment, if your plan is to travel around for the next few years?

Because it’s good to have a home base in between.

I disagree. A home base is a safety net, one that makes you subconsciously resist your next move. We all seem to have a compulsion to occupy the spaces that we call our own. So I prefer to have no space I call my own, at least for a while.

Saying these words made me feel, at least in part, like a fraud. Seeing as I could already feel myself getting comfortable here, with the “temporary” full time job I had taken on upon my unexpected return from Italy. It’s in the woods, I had been telling myself. I love the woods. But in reality I spent a lot of time opening bottles of wine to be served in buckets of ice in a dining room that looked at the woods through large windows.

Moving my tent a few metres every few days had started off as a way to avoid killing the grass, but soon became a symbolic ritual. Time to move on, I would tell myself, dragging my little tent to the left or right, under this or that tree, closer to or further from the fire, or the house, or the fence. But soon it really would be time to move on.

Where will you go next? He asked, tucking a dreadlock behind his ear.

Somewhere warm, I said, pulling the blanket tighter around my shoulders. 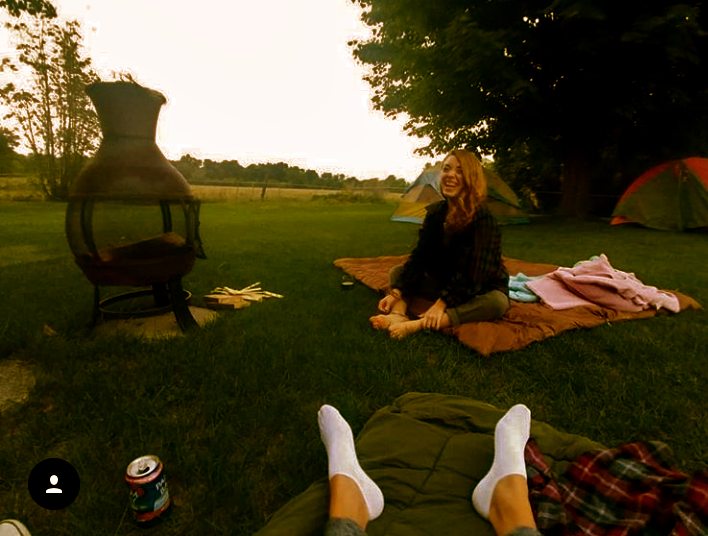